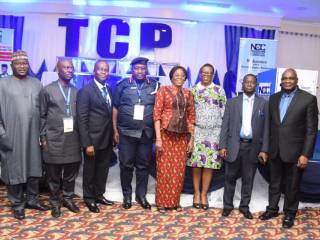 Click to view pictures.
The Nigerian Communications Commission (NCC) at its 85th Edition of Telecoms Consumer Parliament held in Lagos on September 27, 2018 discussed one of the industry’s key challenges: Call Masking/ Refiling and SIM Boxing. The event was declared open by a welcome address delivered by Deputy Director Consumer Affairs Bureau of NCC, Ismail Adedigba.

Executive Vice Chairman/ CEO, NCC, Prof. U. G Garba Danbatta delivered the keynote address through Felicia Onwuegbuchulam, Director Consumer Affairs Bureau. In his presentation, Danbatta described Call Masking/ Refiling and SIM Boxing as one of the key challenges bedevilling the industry that requires immediate address due to its security, economic and social challenges to the nation.

“SIM boxing or Interconnect Bypass Fraud (IBF) is one of the most prevalent frauds in the telecom industry today and it is estimated to be costing the industry $3 billion in lost revenue,” Danbatta disclosed.

Call Masking is described as a phenomenon whereby an international call is masked to appear as a local call on any GSM network in Nigeria.
While SIM Boxing on the other hand refers to electronic boxes or devices with multiple SIMs that have the capacity to terminate calls at local interconnect rates. SIM Boxing was observed to have started at the time the Commission decided to review international termination rates from
N 3.90/ min. to N24.40/ min. for international inbound traffic which provided an opportunity for technology manipulators to terminate calls at N 3. 90/ min. and cart away the difference thereby cutting the revenue meant for the Operators and by implication the government.
A SIM box has capacity to receive and transmit calls undetected.

“However, the challenge is that these SIM boxes are never type-approved by the Commission, a clear indication that they are being used illegally in the country.”, the NCC boss stated.
These phenomena have received fierce reaction from the regulator resulting in the suspension of six interconnect license holders in the country in February, 2018. Also in an effort to rid the industry of this menace, the Commission has deactivated almost one million SIM cards suspected to be used for SIM Masking and SIM Boxing and, the Commission is committed to overcoming this menace through strategic collaboration and partnership with the office of the NSA, DSS, NIA, other security agencies, Committee of the house representatives and relevant stakeholders in the industry.

To provide an interesting discourse, a presentation was delivered by Barrister Ayoola Oke entitled: “ Overcoming Challenges of Call Masking/ Refiling: Task ahead for the Telecom Industry.” This presentation preceded a designed panel of discussion among the Operators, NCC ( the regulator) and inputs from various stakeholders of the industry with a view to proffering solutions to these twin challenges.
At the end of the panel discussion, eleven resolutions have been adopted to serve as counter- measures to Call Masking/ Refiling and SIM Boxing.
Philip Eretan, Deputy Director at NCC offered the vote of thanks on behalf of the Commission.