Shittu's voice was amplified by Abdulaziz Mashi, the Permanent Secretary of Federal Ministry of Communications and all stakeholders who met at a 2-Day Seminar on SOCIAL MEDIA FOR GOOD GOVERNANCE SEMINAR: LEVERAGING ICT FOR NATIONAL DEVELOPMENT, held at Treasure Suites and Conference Centre in Abuja. 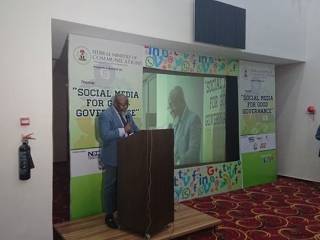 Click to view pictures.
Organised by the Federal Minisyry of Communications, the seminar was supported by Facebook, Google and Microsoft, as well as by all the agencies supervised by the Ministry - NCC, NITDA, NIPOST, NIGCOMSAT, and Galaxy Backbone Plc.

Shittu said "in an era when the social media have become very strong platforms for information dissemination and public discourse, it is imperative for government and key players in the private sector to pay extra attention to feedback from, and utilize these new media to provide platform for government-citizen and business-public engagement in an online, real-time and interactive manner".

The seminar and retreat, Shittu said is designed - among other goals - to share knowledge and information oriented in recent research and analysis of sovial media use; and to review good practices on policies and programmes promoting social media for good governamce and other effective uses of the communication networks.

The Minister noted those uses to include creating means to improve governance, opening up access to government and government officials, saving time and money, and creating new ways of working.

Accordingly, "government will not limit Nigerians' access to social media solely on the basis that it may be used to express views critical of government or the social-political system. Protecting critical expressions on the Internet is the standard by which governments are now held to be genuinely democratic" Shittu told the large gathering of delegates from all the agencies in the Ministry, journalists and other communication professionals and a galaxy of other stakeholders.

The Minister however bemoaned the use of the social media networks for "divisive, tribal, parochial, fabricated and sentimental information, messages and ideas capable of disintegrating the country". In its stead, Shittu urged Nigerians to draw inspiration from enterprising young Nigerians across industries who have used social media to achieve phenomenal strides that have shaped our lives qualitatively.

Tony Ojobo, NCC Director Public Affairs, who presented the lead paper on PUBLIC COMMUNICATION IN THE ERA OF NEW MEDIA, and drawing on NCC's and other exemplary practices demonstrated in a concrete sense how social media can be deployed for greater effectiveness in public sector communication in Nigeria.

The presentation by other presenters including Ade Atobatele, Akeem Adeniji-Adele, and Abdul-Hakeem Ajijola, which focused respectively on THE MAGIC OF WORDS; DIGITAL TRANSFORMATION; and  SOCIAL MEDIA AS A TOOL AGAINST WEAPONIZATION: HATE SPEECH, FAKE NEWS, were also enthusiastically received and discussed by the audience.

In 2018, the Ministry of Communications plans to organise series of seminars and a Social Media Week for communication professionals in all Ministries, Departments and Agencies (MDAs) of the Federal Government.