We will Auction 5G Spectrum in December - NCC 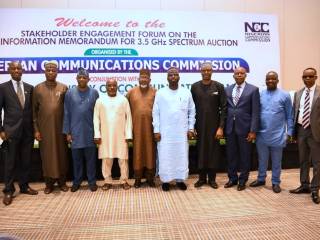 The Nigerian Communications Commission (NCC) has officially declared that the auction of the 3.5 Gigahertz (3.5 GHz) spectrum for the deployment of Fifth Generation (5G) technology in Nigeria, will take place on December 13, 2021.

According to the Information Memorandum (IM) presented by the Commission at a stakeholder engagement forum organised on 5G spectrum in Lagos recently, NCC is adopting Ascending Clock Auction format, which is software-based while a mock auction has been slated for December 10, 2021, as a precursor to the actual auction on December 13, 2021.

The IM also explains the rollout obligations of the would-be eventual winners of the spectrum licence auction, whose reserved price has been pegged at $197.4 million (N75 billion).

According to the IM, the auction comes with a 10-year spectrum licence and a minimum requirement of an operational Universal Access Service Licence (UASL). However, new entrants or licensees without a UASL will be required to obtain a UASL operational license to be qualified for the 5G licence.

The eventual licensees will have a rollout obligation plan spanning a period of 10 years, beginning from the date of award of the licence. Between the first and second year of the licence, the operators are expected to rollout service in, at least, one state in each geo-political zone.

From the third to fifth year, they are obligated to cover all the zones. Between six to 10 years, they should cover all the states in the country, according to guidelines set out in the IM.

Speaking at the forum, Minister of Communications and Digital Economy, Prof. Isa Ali Ibrahim Pantami, said the Ministry has been working closely with the Commission to ensure that necessary spectrum resources needed for the deployment of 5G network in Nigeria to accelerate the nation’s digital economy space is made available.

Represented by a Director in the Ministry, who is concurrently the Secretary, National Frequency Management Council (NFMC), Abubakar Ladan, the Minister said the 3.5GHz is the most popular spectrum band used globally by regulators and operators for the deployment of 5G technology, and it seems the only band available in Nigeria for immediate use by operators.

In his address, the Executive Vice Chairman of NCC, Prof. Umar Garba Danbatta, listed the various steps diligently taken by the Commission that culminated in present status of the 5G deployment plan. He also reeled out data to justify how profitable investment in 5G deployment will be for potential operators and investors in the country.

He said while the global impact of Fourth Generation (4G) technology brought about increase in mobile usage and network performance, 5G technology will leverage on this momentum, bringing substantial network improvements, including higher connection speed, mobility and capacity, as well as low-latency capabilities.

The Forum was well attended by industry stakeholders, including operators, industry associations and groups, advocacy bodies, and the media.

The Association of Licensed Telecoms Operators of Nigeria (ALTON), among others, called on the government to continue to make the operating environment more conducive for the existing and prospective licensees in the telecom ecosystem, in order to enable Nugeria to fully harness and harvest the derivable benefits of mobile technology in the country.

The stakeholder engagement forum was organized in keeping with the provisions of the Nigerian Communications Act (NCA) 2003 and NCC’s tradition of consultative regulatory practice.