“Without the Media We’ll be Disconnected from the Public” – Danbatta 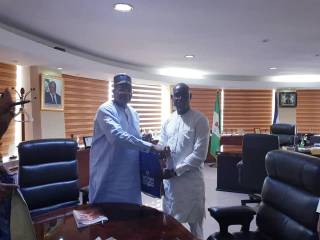 Click to view pictures.
The Executive Vice Chairman and Chief Executive (EVC/CE) of the Nigerian Communications Commission (NCC), Prof. Umar Danbatta has stated that the media - mainstream and online - remain critical stakeholders of the Nigerian Communications Commission because "without the media the NCC will be disconnected with its other publics among which are the telecom consumers who constitute the lifeblood of the telecom industry in Nigeria".

Danbatta made this declaration this afternoon when the top management of LEADERSMAIL Magazine paid him a visit to present the Exemplary Leadership Qualities and Transparent Antecedents Public Service Award to him.

He told his visitors that scrubbing of the biometric data of subscribers with respect to SIM Card administration is a routine activity of the Commission which strengthens Federal Government’s objective of harmonizing citizens’ and residents’ identity and to help security governance. Danbatta stated further that because the Commission could access the appropriate technologies, it is migrating from four-featured capture of biometrics to capturing of 10 features, and this is being done without disrupting services to millions of subscribers.

He noted that the term scrubbing refers to the verification and validation of subscriber data and the Commission reveled this information recently at one of its sensitization forums in the spirit of transparency and accountability for which it is noted.
Regrettably, "the presentation was misconstrued in a report which latently created a little panic and this explained why the Commission recently issued statements to clarify its positions on the matter". The EVC declared to express NCC's gratitude that the media received the clarifications well. He assured telecom consumers not to panic over this matter because the exercise has been a routine activity which never led to disruption in services.

Earlier, Jubrin Abubakar, the publisher of Leadersmail and the medium’s Editor-in-Chief, Abdulmalik Ohis, told the EVC that the award is conferred on him because of his initiatives, programmes and measurable accomplishments since he assumed office in 2015, and the honour is meant to encourage him to do more for Nigeria. The Editor-in-chief, who spoke on behalf of LEADERSMAIL, recalled that the 2442 short code which is helping the telecom consumers to manage unsolicited messages, as well as the 622 Toll Free Line created by the Commission to enable the consumers to escalate unresolved complaints, are commendable achievements.

In response, Danbatta commended LEADERMAIL for dedicating the magazine to the illumination of issues of national cohesion, transformation and innovation. He affirmed that Nigeria is at the threshold of achieving her potentialities and NCC is ready to encourage innovative entrepreneurship especially among the young generation of Nigerians. The EVC noted that media such as LEADERSMAIL are relied upon by the Commission in its agenda for strategic partnership and collaboration in chronicling the accomplishments of the Commission.

The NCC Chief Executive thanked past leaders of NCC for instituting a tradition and culture that made the Commission a flagship of public sector regulatory governance. He described himself as a custodian of that tradition of excellence and seized the opportunity to once again commend the staff of the Commission for supporting him and the board of the Commission to consolidate on the gains of the telecom industry in Nigeria.